If you need an easy getaway on a neighboring Hawaiian island, the answer may be a staycation on Oahu. Spending time in Hawaii's "Big City" means a chance to get in some shopping (including at outlet stores), eat Pacific Rim cuisine, and check out tasty hole-in-the-wall food joints. You can also see a variety of museums and concerts, and take in any number of cultural experiences.

You might spend your time in bustling Waikiki, once a playground of Hawaiian royalty. Or you may choose to stay in one of the island's laidback beach towns such as Haleiwa, where you can cool off with shave ice and watch the big surf, or check out nearby Kahuku where you can have lunch at iconic shrimp trucks. Whether you want to golf or hike, play in the ocean, or take your kids to the water park or Aulani, A Disney Resort, there's a lot to enjoy on Oahu.

For relaxed, low-key accommodations, check out Breakers Hotel with its nostalgic charm. The hotel is on a street called Beach Walk, a rare, tucked-away area with a sense of quiet in otherwise busy Waikiki. It's a short, palm-shaded stroll from the hotel to Kalakaua Avenue, Waikiki's main shopping drag, which offers plenty of restaurants, shops, and entertainment possibilities. The long-standing hotel is made up of six low-rise buildings set around a pool and deck.

The hotel is home to a Japanese restaurant, the Wasabi Bistro. And every unit has a small but fully equipped kitchenette in case you want to prepare some of your own meals. Rooms vary in size from studio up to a garden suite that comes with a sitting room and bedroom and can sleep up to five. Some units sport lanai, all open to the cool trade winds if you're looking for a break from air conditioning. The hotel has free Wi-Fi and offers a limited number of free parking spaces that are available first-come, first-served.

You're in for a surprise if you haven't visited Ala Moana Shopping Center for some time. Not only because the world's largest open-air shopping center keeps expanding—it now covers more than 2 million square feet and boasts over 300 stores—but also because of its new dining concept: Shirokiya Japan Village Walk. This huge indoor facility is lined with over 50 shops, most of them preparing and serving food. It's designed to create the feeling of wandering through a Japanese village, as patrons decide what to eat from among the various street vendors. The many food kiosks cook and serve bentos, soba, udon, yakitori, curry, tempura and more.

In addition to the food stations, Village Walks houses 14 specialty bistros, the Vintage Cave Bakery, and a beer garden. It also comprises five exhibition rooms with collections by Japanese artisans and craftsmen. Shirokiya markets Japan Village Walk is the only such development in the world. Created as a theme park village, in the image of a Japanese town complete with shrines, the giant eatery includes a Guardian Spirits Sanctuary at its center with altars bearing attractively crafted Japanese statues. In addition to Japanese food, vendors sell pizza, burgers, crepes, and various other ethnic offerings, from Thai, Korean and Vietnamese dishes to local foods.

Oahu is a great island for getting your hiking shoes out. A fairly easy and quickly rewarding hike can be found with the Makapuu Lighthouse Trail. At the top of this three-mile, roundtrip jaunt, you'll find panoramic views of the shoreline in both directions, as well as the inside of Koko Crater. Humpback whales can often be spotted during the November through May whale season, and on a clear day, you can spot Molokai and Lanai in the distance. Give yourself a couple of hours for this hike, and be sure to take water and sun protection.

If you're more in the mood for jumping in the ocean than gazing at it from afar, head to Lanikai Beach. Lanikai Beach has consistently been regarded as one of the nation's most dazzling beaches by visitors from around the world. It's also a prime spot for laidback relaxation and water play, even for local residents. The half-mile stretch of white sand beach alongside glassy, turquoise waters is located in a residential area in Kailua, on the Windward side of the island.

Eye-opening improvements have brought a flurry of novelty shops to Honolulu's south shore. Kakaako, in particular, has been remodeled into quite a trendy district that includes an 85,000-square-foot retail and restaurant complex by Kamehameha Schools called SALT. While on your Oahu vacation, check out the pedestrian-oriented city block, named for the paakai (salt) ponds that once made up the area.

Now, the area is filled with modern, open-air spaces and eclectic shops such as Hungry Ear Records and Lonohana Estate Chocolate, Morning Brew coffee house, Hank's Haute Dogs and loads more. Check SALT's calendar of events when you're in town for the many street festivals that have helped make the place a crowd draw, with live entertainment, food trucks with tasty fare, and local vendors selling fashion and made-in-Hawaii products.

Discover our full list of must-see places to stay, eat, adventure and shop below! 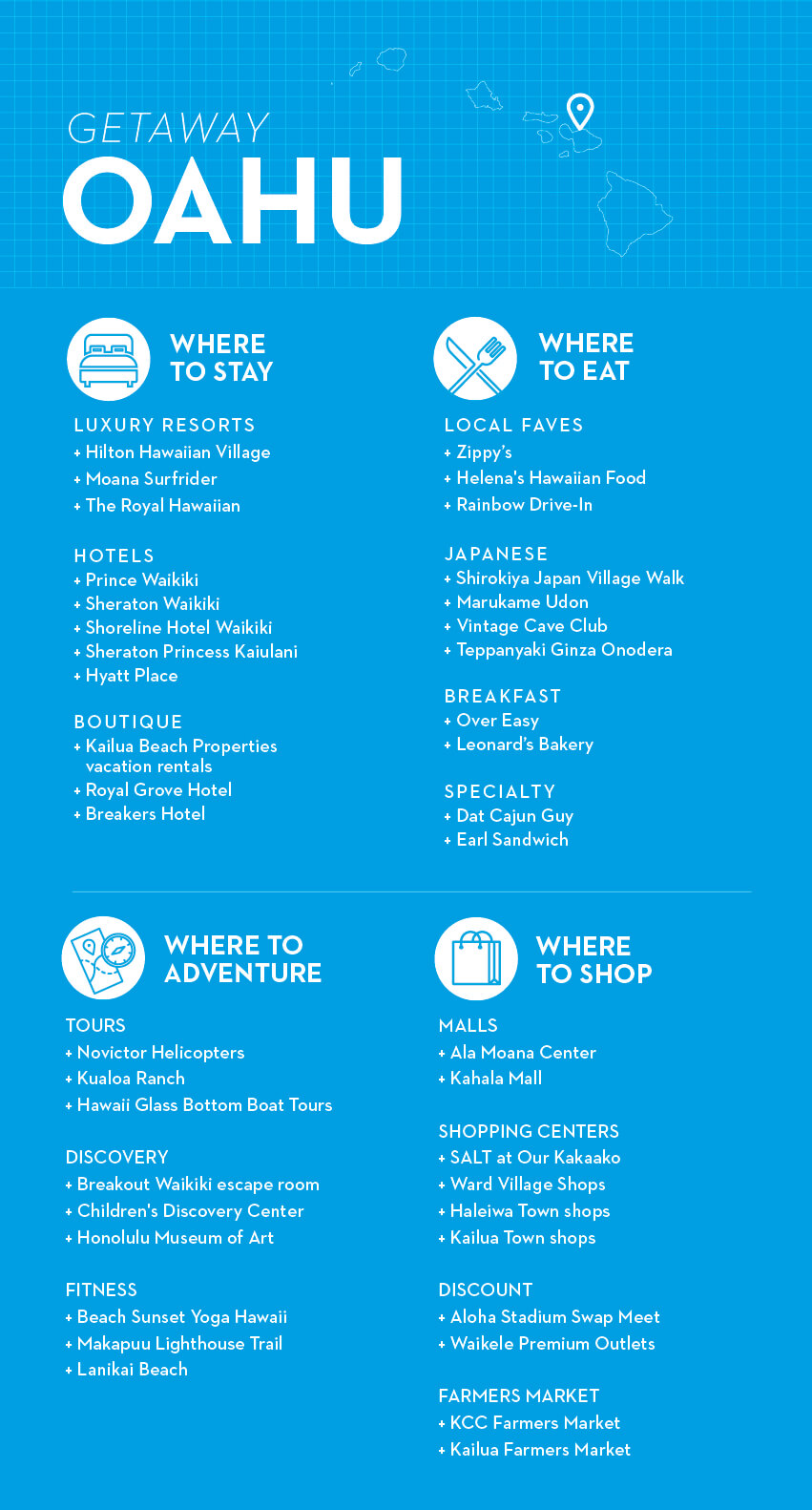 All Bank of Hawaii branches will be closed on November 26, 2020, in observance of Thanksgiving Day. Mobile Banking, e-Bankoh Online Banking, and ATMs are always available 24/7. See Branch Holidays Schedule >