Looking for some R&R, but don't want to travel too far from home? A staycation on Hawaii Island is packed with everything needed to recharge your batteries.

The state's largest island manages to fit all of the world's climates into 4,000 square miles, and that makes for a diverse set of adventures to choose from.

Several of the island's shorelines are classified by climatologists as desert. The west side's stark black lava shores, the northwest's Puako Petroglyph Archaeological Preserve and beautiful Hapuna Beach, and further south, there's Kailua-Kona—all areas for playing or relaxing under the hot sun.

The east side gives rise to four humid tropical climates that keep Hilo town, the wilds of Waipio Valley, and the plunging 442-foot Akaka Falls dramatically lush. Hilo, in fact, has laid claim to fame as the wettest city in the state, and is among the wettest cities in the world.

If you're looking for a change from the lowland heat, head upcountry for a cooler climate. The higher elevations of northerly Waimea and southeasterly Hawaii Volcanoes National Park are described as temperate. Heading to even higher elevations, you can experience an alpine climate—marked by average temperatures that fall below 50—at the top of Maunakea and on the Mauna Loa Observatory and Trail (take a coat).

To experience almost all the climates of the world, look no further than a 30-45-minute plane ride to Hawaii Island, and enjoy a staycation sporting a range of fun in a variety of temperatures. 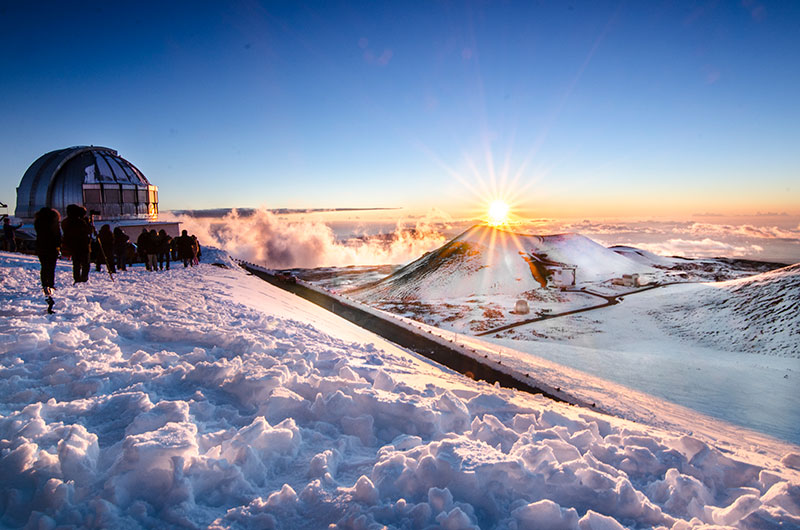 Holualoa Inn, an elegant bed and breakfast, is located at a cool 1,300 feet up the slopes of Hualalai near the tiny artists community of Holualoa. Guests are instantly greeted by panoramic ocean views and a warm spirit of hospitality. Fodor's has called the establishment one of the best 100 hotels in the world.

The top-notch lodging is set amidst 30 acres of fruit orchards, where fresh ingredients for farm-to-table gourmet breakfasts are harvested. The 100 percent Kona coffee they serve is cultivated from a farm right on the property, boasting 4,000 coffee trees.

A scenic atmosphere greets you on every part of the property, whether you're strolling along footpaths lined with guava and lilikoi that wind through the estate, relaxing at the mosaic swimming pool and hot tub that overlook the Kona coast, or gazing at breathtaking sunsets from the rooftop gazebo.

There are two Jackie Rey's Ohana Grill restaurants on the island, one in Kailua-Kona and the other in downtown Hilo. Both offer casual dining that features boat-to-table seafood, fresh meats, pasta dishes and salads—a menu branded as continental cuisine with an island flair.

Whatever type of natural terrain you may want to explore—whether mountain summit, forest or waterfall—the highly-rated Hawaii Forest & Trail tour company can get you there. Its trained guides offer tours to see sunrise or sunset on Maunakea, hikes to active lava flows, or trips to ideal mountain vistas for stargazing. Other tours include bird watching, zip lining, or swimming under a waterfall. Outside magazine has called the longstanding and well-respected company one of the country's Best Places to Work. Owner and naturalist Rob Pacheco says the company's goal is to support each guest in making a meaningful connection to the island. They support kamaaina, as well, so be sure to ask for the 20 percent discount on all tours.

Volcano Art Center Gallery, located near the Kilauea Visitor Center in Hawaii Volcanoes National Park, surrounds you with artwork created by 300 or so Big Island artists, inspired by Kilauea Volcano. This is the place for finding quality, one-of-a-kind omiyage. The gallery features both traditional and contemporary work by top local artists, including finely crafted furniture made from native woods, hand-blown glass, jewelry, ceramics, photography, and other two- and three-dimensional art.

The gallery building claims an engaging history of its own as a previous incarnation of the Volcano House hotel, built in 1877 to house 19th-century tourists to the volcano. Writers Mark Twain, Isabella Bird and Robert Louis Stevenson were among the visitors who slept overnight in the building, as did King Kalakaua and French microbiologist Louis Pasteur.

Discover our full list of must-see places to sleep, adventure, eat and shop below! 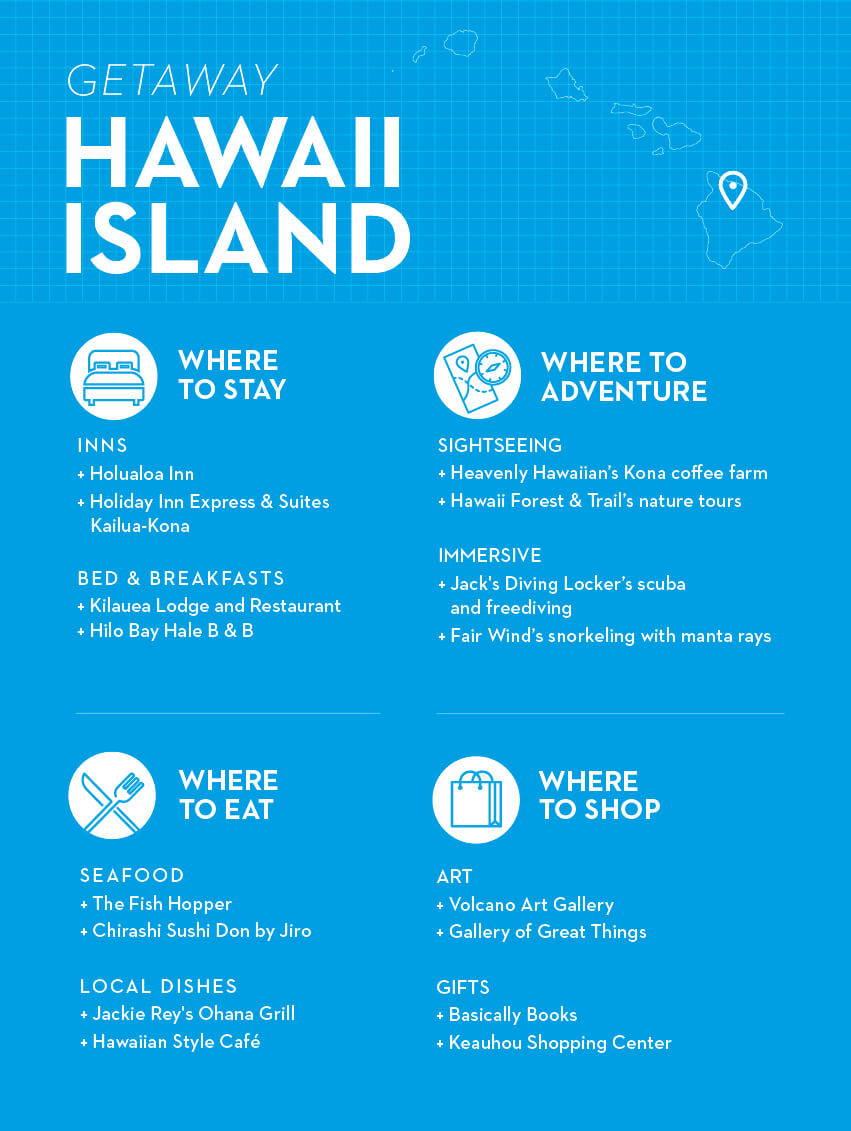