What to do in Austin, TX for First Time Visitors

Due to ongoing concerns regarding the COVID-19 pandemic, please be sure to check the latest CDC travel guidelines, as well as company cancellation policies before booking any travel, activities, or accommodations.

Everything's bigger in Texas, as the saying goes. This seems to be especially true in Austin, one of the fastest-growing cities in the United States for more than a decade, with one of the largest populations of any U.S. capital city. As the self-proclaimed live music capital of the world, Austin is home to South by Southwest, one of the biggest film, music, and media festivals in the U.S., as well as numerous jazz and blues concerts, outdoor art festivals, LGBTQ+ pride parades, biker rallies and countless other events year-round.

From mountain hikes to a hip bar scene to storied historical sites, there are many reasons to explore the Texas capital. And now that Hawaiian Airlines is offering nonstop flights from Honolulu to Austin, the City of the Violet Crown should definitely be on your short list for places to visit when it's safe to travel again. If you've never been to Austin before, don't worry: Here's a round-up of some of the city's best attractions, adventures and what to do in Austin, TX.

Just south of downtown Austin, the neighborhood of South Congress, or “SoCo" to locals, offers an eclectic assortment of vintage boutiques, chic restaurants and funky bars with homespun elegance. (And there's always live music!) Designed to be the city's most distinguished thoroughfare by Austin's first mayor Edwin Waller in the 1830s, the neighborhood around South Congress Avenue has taken on an eccentric life of its own in recent years. Today, it's home to many of the small businesses that help “Keep Austin Weird" and is an essential destination for dining, shopping and entertainment.

Start your day with breakfast at Café No Sé in the South Congress Hotel (where executive pastry chef Amanda Rockman was a semifinalist for the James Beard award) with lemon-ricotta hotcakes, apple-thyme chutney and pecan butter—or snag a slice of pepperoni or margherita thin crust at the “Queen of Pies" Home Slice Pizza. For trendier fare, soak up beachy vibes on the oak-shaded outdoor patio at Perla's while enjoying fresh fish and oysters flown in daily from both coasts.

Go antique shopping at Uncommon Objects, or peruse the contemporary works by local folk artists at the quirky Yard Dog Art Gallery. If you've got a flair for the dramatic, Lucy in Disguise with Diamonds boasts over 8,000 square feet of costumes, wigs, masks, gloves, hosiery and assorted other vintage wear. If the boot fits, buy it at Allens Boots, the famed western wear shop that has been an Austin landmark since 1977. You can't miss Allens on South Congress Ave.—just look for the giant red boot above the entrance.

In the heart of Austin, the Ann and Roy Butler Hike-and-Bike Trail at Lady Bird Lake is a 10-mile lush urban path named for a former Austin mayor and his wife, where locals and visitors can gather to relax, exercise and explore. As the city's most popular and best recognized recreational area, the hike-and-bike trail attracts more than 2.6 million people a year and provides a leisurely ride for cyclists, runners and families.

Cool off after an afternoon on the trail with a dip in either Deep Eddy, the state's oldest swimming hole; or Barton Springs Pool, a 3-acre pool perfect for laps (actor Robert Redford learned to swim here when he was 5 years old). Both pools are fed from underground springs located on either side of Lady Bird Lake and the water hovers between a comfortable 65-degrees to 75-degrees all year long.

For refreshments, enjoy a picnic in the park while taking in sweeping views of downtown Austin across Lady Bird Lake. Or stop at nearby Alta's Cafe, serving freshly-made smoothies, salads, sandwiches, charcuterie boards and avocado toast seven days a week. 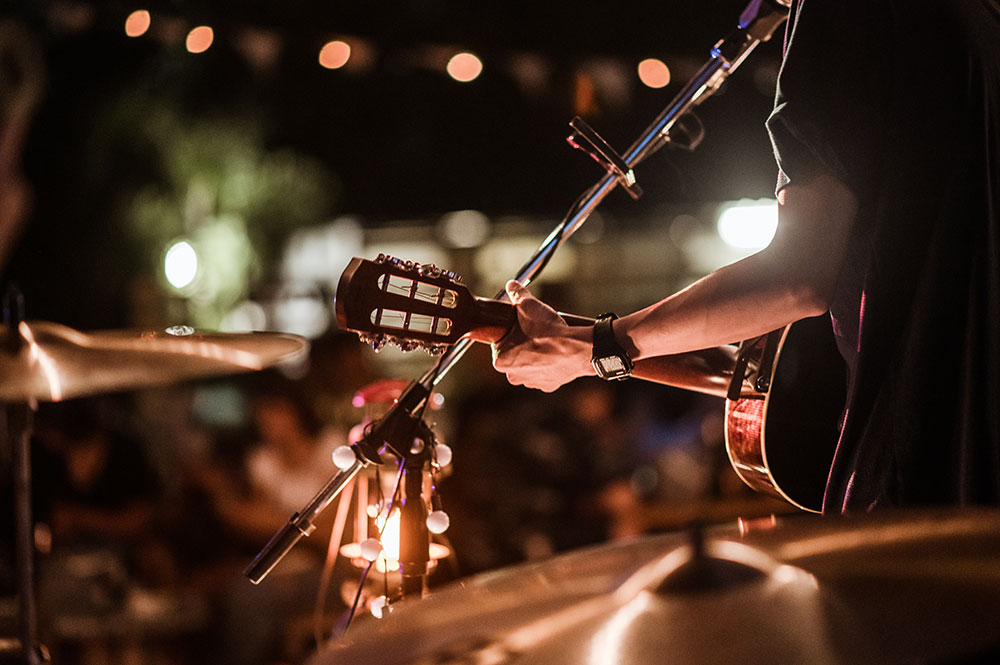 What began as a single blues club in the mid-1970s amid drugstores and industrial buildings on Sixth Street helped give rise to dozens of bars and clubs in the area. Today, this stretch of Sixth Street that runs from Congress Avenue to I-35 has since become a live music hotspot known as “Dirty Sixth" to locals. Sure, there's a solid college crowd (the University of Austin at Texas is just one mile north) that's attracted to the dive bars offering dollar shots and a rowdy party scene that develops on busier nights. But there's also a grungy charm here that often goes overlooked.

Decide for yourself with a visit to some of the most popular destinations on Dirty Sixth, including the rustic Maggie Mae's—where you can enjoy live music in Austin daily in one of three lounges or people-watch from the bar's rooftop patio overlooking Sixth—and The Parish, which offers arguably the highest-quality music production equipment in Austin (for live events and recording sessions alike), attracting regular performers such as Pete Townshend, Slash and Radiohead's Thom Yorke.

There's no better way to discover a new place than by learning from the people who know it best. Luckily, there's Austin Detours, which offers interactive excursions for visitors looking to enjoy memorable experiences around the city. This woman-owned tour company “for people who don't like tours" specializes in custom visits to major landmarks and hole-in-the-wall gems alike, plus wineries, wildflower fields and more.

Explore the many murals in different neighborhoods throughout Austin and step inside eclectic galleries on a street art tour, or learn about Austin's music history and go backstage at iconic local venues on a live music tour led by a local musician. We recommend the “bucket list" city tour that gives visitors an overview of Austin in just two hours. From the comfort of a Mercedes van, learn about Austin history and folklore as you drive through local neighborhoods and get out at famous landmarks, secret spots, public parks and food trucks.

Austin takes its barbecue seriously. Whether you're looking for old school-style smoked meats or sizzling new BBQ joints with a modern twist, taste some of the best the city has to offer at these spots:

You read that right. Thanks to a reconstruction mistake on Austin's Congress Avenue Bridge in 1980, which created narrow crevices between the beams underneath the bridge, Mexican free-tailed bats quickly found their way to Austin and made a home in what turned out to be a perfect bat habitat. From March to November each year, close to a million of these bats fill the Austin skies each evening, like a scene out of a horror movie. But don't worry: these nocturnal creatures aren't monsters. Actually, they consume an estimated 250 tons of insects daily and their nightly flights are an incredible sight.

Catch the show from the Congress Avenue Bridge itself, or at the Statesman Bat Observation Center, adjacent to the bridge. You can also get a front row view from the water; Lone Star Riverboat and Capital Cruises offer evening tours on Lady Bird Lake. If you're really feeling batty, celebrate Austin's unofficial flying mascots at Bat Fest, an outdoor music and art festival and bat-viewing party that happens each year in mid-August.

Have a drink at the Driskill

Built in 1886, the opulent Driskill Hotel is a Texas landmark. The Driskill is where former President Lyndon Johnson met Claudia “Lady Bird" Taylor, his future wife, and the hotel was where Johnson watched the landslide victory results of the 1964 Presidential Election. The hotel has since become known as the site of the inaugural ball for many Texas governors and is listed on the National Register of Historic Places.

Step inside the hotel today—through the columned lobby, beneath the stained-glass dome, and up the marble staircase—and enter the Driskill Bar, where the cowhide barstools and tanned leather couches aren't intended as a trendy hipster look; this is the real deal. Southern Living magazine named the Driskill Bar the “Best Bar in Texas," partially for classy cocktails, such as the TX Revolver, made with Fernet Branca, bourbon, and maple syrup; or the Batini, which celebrates Austin's reputation as “bat city," made with Tito's vodka, hibiscus, ginger and citrus. 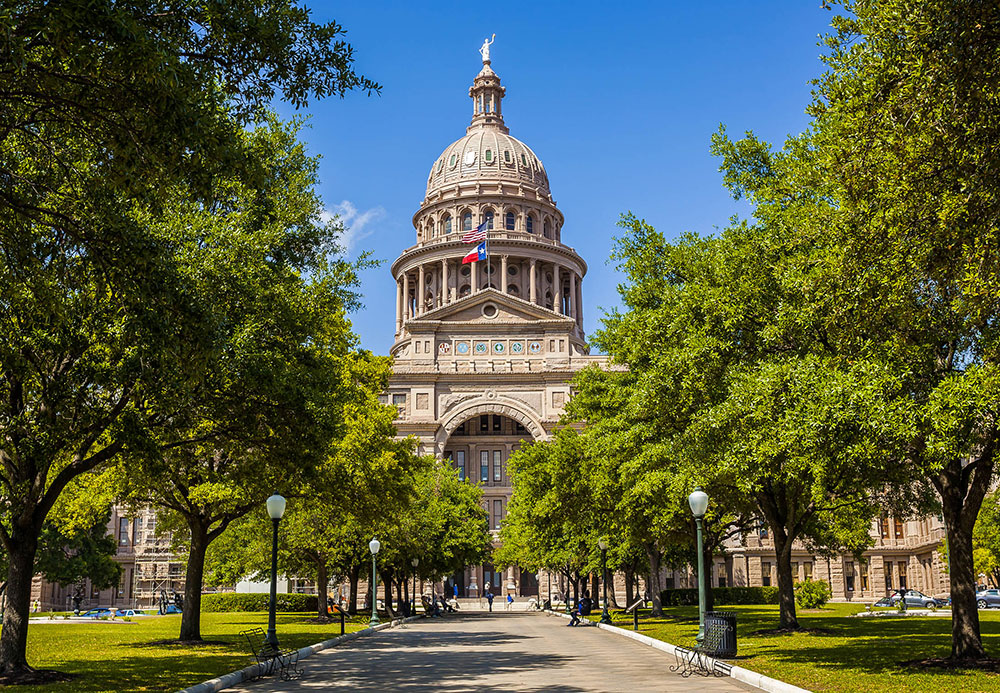 No visit to Austin is complete without a visit to the Texas Capitol. The largest state capitol building in the United States by total square footage (second only in total size to the National Capitol in Washington, D.C.), the historic Texas statehouse is clad entirely in eye-catching “Texas pink" granite, a rare and unique form of granite formed from crystallized molten rock.

Across the 22 acres spanning the capitol grounds, there are 17 monuments honoring Texas heroes, including volunteer firemen, Texas Rangers, those who fought at the Alamo and veterans of the Vietnam, Korean and world wars. Learn about Texas history on a self-guided tour; brochures are available at the north entrance.

While there are still travel challenges due to the pandemic, that shouldn't keep us from planning a great vacation when it's safe to travel again! And once it is, wouldn't it be amazing if your flight was covered just by purchasing things you buy every day?

Just tap to pay, and you could be one step closer to two-steppin' in the live music capital of the world.

The individuals and owners of any other trademarks, logos, brands or other designations of origin shown, named or mentioned herein did not sponsor, endorse or preview this article.

No purchase or transaction necessary to enter. Open to legal residents of the state of Hawaii, 18 or older. Starts 12:00:01 am September 1, 2021 and ends 11:59:59 pm December 31, 2021. Odds of winning depend upon number of eligible entries. Approximate retail value of an individual prize ranges from $3,000 to $30,000. For complete rules and eligibility, visit boh.com/5millionmilesrules Sponsor: Bank of Hawaii, Inc.